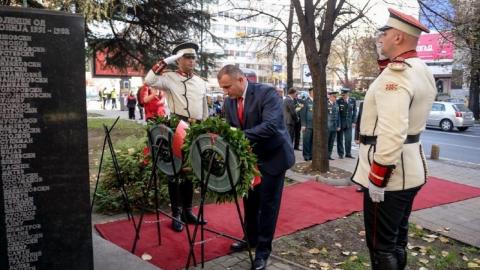 Senior presidential, government and municipal officials, as well as representatives of war veterans, laid flowers on Friday in front of the monument dubbed 'Mother's Broken Wing' in central Skopje in memory of the 54 young Macedonians who lost their lives amid the collapse of the federal Yugoslav state.

"They fought, suffered, were injured or killed for someone else's interests, in wars that for us were distant and foreign," the national coordinator for war and police veterans, retired police general Stojance Angelov, told the ceremony.

Although the then Socialist Republic of Macedonia never took part or sides in the Yugoslav conflicts, it did suffer losses during the hostilities.

The 54 young Macedonians who died were Yugoslav People's Army conscripts who were posted to parts of the former federative state that descended into armed conflict.

Most of them died during the escalation of the war in Croatia in 1991 where many former Yugoslav People's Army bases found themselves surrounded by local militias and independence fighters.

The first Macedonian victim was 19-year-old soldier Sasko Geshovski from the town of Kavadarci.

He was killed on May 6, 1991 in the Croatian coastal town of Split while on guard duty at the navy base there, amid fierce protests by Croatians who were demanding independence.

To this day, the exact circumstances of his death are still not fully known.

It took several months from the point at which the war escalated for the North Macedonian authorities to find ways to stop sending new conscripts to the Yugoslav People's Army, which increasingly coming under the control of Serbian strongman leader Slobodan Milosevic.

It took even more time for the government in Skopje to pull out all its...

Protests in Bulgaria, Day 78: Procession to the Headquarters of the Movement for Rights and Freedoms