'Turkey should step up efforts on zero target for mother deaths' 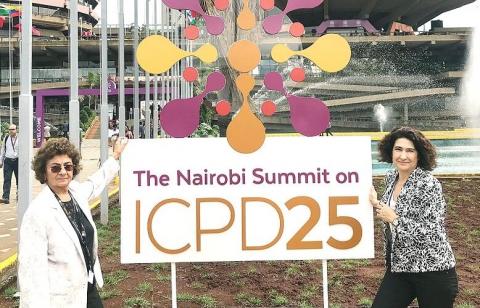 Professor Ayşe Akın received a United Nations Population Fund (UNFPA) award last week in Nairobi, Kenya at the International Conference on Population and Development (ICDP25) for her contribution to the health of women at the global and national levels since 1994, when the first ICDP took place in Cairo, which she had also attended.
Can you give us an overview of Turkey's population policies?
The new republic's population was 13 million at the end of the war of liberation, when a lot of men had lost their lives. Modern Turkey founder Mustafa Kemal Atatürk had endorsed a pro-natal policy, but he has no forceful statement on the record.
In the 1950's the increase in the number of unsafe abortions because of unwanted pregnancies had led the decision-makers to change the policy. Imagine, the world starts getting interested in population growth in the 60's, whereas family planning came to the agenda a decade ago in Turkey.
After a decade of efforts, the first population law was endorsed in 1965. The law legalized providing information, use of modern contraception methods like pills, condoms and abortion only on medical grounds.
While the use of modern methods increased, the law could not prevent induced abortion (abortion performed by the pregnant woman herself or with the help of another, without medical assistance.)
In the 1970's despite its illegality, there were 400,000 induced abortions a year and at least 50,000 of them were self-induced, which became the main cause of the high level of maternal deaths. Women used soap, matches or skewers. I had many patients coming to me, unable to urinate for instance. I had patients die because of self-induced abortion. Unsafe abortion means death.
The woman is poor, she does not...

Turkey condemns attack on AU base in Somalia

Slovenian killed in robbery in Kenya