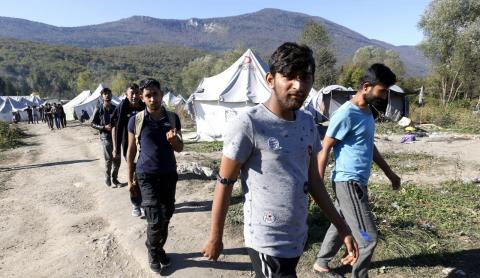 A migrant shot and seriously wounded by Croatian police may have been struck by accident, Croatian Interior Minister Davor Bozinovic said late on Sunday, responding to the latest incident that has raised questions about the tactics used by the European Union member against migrants and refugees trying to cross its territory.

Police have not officially confirmed reports of a man being shot and wounded when officers tried to stop a group of migrants late on Saturday in the western Gorski Kotar region of Croatia near the border with Slovenia.

Bozinovic, however, confirmed an incident had taken place and said prosecutors were investigating.

"It is too early to talk about the results of that investigation," he told media, but added: "What I could possibly say at this point is that it has not been established that the use of the firearm was directed at a specific person, with the intention of acting against a person."

The wounded migrant was taken to hospital in the port city of Rijeka and, according to local media, remains in intensive care with life-threatening injuries.

Bozinovic said the man had been travelling in a group of around 15 other migrants, who were taken to a local police station.

Rights groups have repeatedly drawn attention to what they say are the heavy-handed tactics of Croatian police in their handling of migrants and refugees, accusing the country of a strategy of unlawful and often violent 'pushbacks' over the border.

Croatia has denied any wrongdoing.

The number of people trying to cross from Bosnia into Croatia is growing; between January and July this year, 14,690 new migrants and refugees were reported to have arrived in Bosnia, according to the International Organisation for Migration, IOM, or 54...