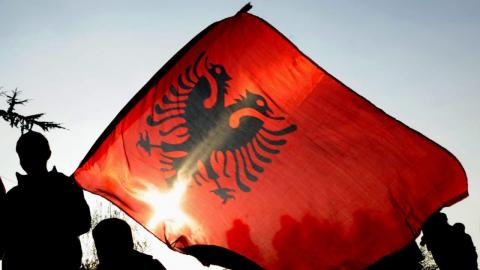 "Based on the Law on Misdemeanours, the foreigner was fined 300 euros and expelled from the territory of Montenegro for a period of one month," a police statement said.

While Montenegro does not forbid ethnic minorities from displaying their own national symbols, it requires that they also display the Montenegrin national flag alongside them or face fines of between 100 and 500 euros.

But Albanian-language website Malesia.org complained that the Montenegrin authorities were violating Albanians' rights.

"It's shameful how a state like Montenegro, which proclaims itself a democratic and free one and is bidding for EU membership, prohibits the free use of a native people's flag, in this case even for private use," Malesia.org said.

In August, Montenegro's Ministry of Culture announced charges against the organisers of a concert near the predominantly Albanian-populated town of Tuzi over the use of the Albanian national flag.

The Albanian Forum, a coalition of parties which is part of Montenegro's government, argued however that the flag that was displayed was the "flag of all Albanians, not a foreign state".

Last year, a group of Albanian tourists was also fined 230 euros for waving an Albanian flag in the coastal city of Budva.

With some 630,000 people, Montenegro is a multi-ethnic state unusual in having no one community that makes up over half of its population.

About 45 per cent identify as Montenegrins, about 29 per cent as Serbs and five per cent as Albanians.