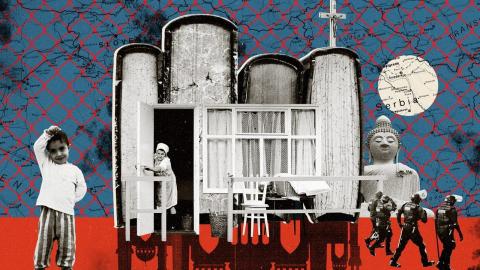 Within two years, the Serbian branch of Generation Identity was born, its core made up of disaffected young members of a party led by a firebrand ultranationalist called Vojislav Seselj, a rotund, 65-year-old convicted war criminal reviled across the Balkans for his blood-soaked rhetoric during the collapse of Yugoslavia in the 1990s.

For some in the Serbian far-right, the Identitarians represented a chance to rebrand themselves in the image of a movement fronted by well-groomed millennials selling repackaged racism, a 'blood and soil lite' concept of "ethnopluralism" that has roots in the European New Right of the 1960s and stresses culture and identity rather than race and genetics.

Serbia, after all, holds a special place in the far-right narrative in Europe, its loss of majority-Albanian Kosovo in a 1998-99 war held up as a case study of the 'Islamic colonisation' of 'Christian land', threatened anew, they say, since 2015 with the flow of mainly Muslim migrants and refugees from the Middle East, Africa and Asia to Europe's shores.

Yet by mid-2018, the Serbian branch had folded. The reasons for its failure are many and varied, but the experiment nevertheless shed light on the changing nature of far-right politics in the Balkans and beyond. Serbia has proved more valuable as a propaganda tool for Western far-right movements than as an actual stage for Identitarian expansion.

People pass by a wall with a sprayed map of Kosovo and a slogan (in Cyrillic) reading: 'No division', in Belgrade, Serbia, 2018. Photo: EPA-EFE/KOCA SULEJMANOVIC

The year after Vorkapic returned to Serbia, Nikola...