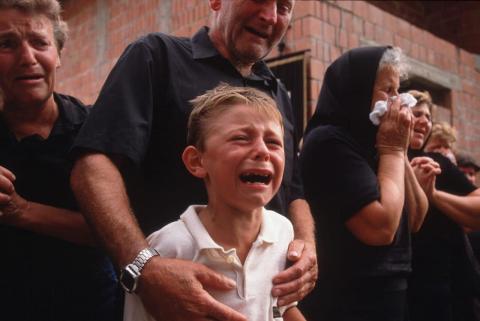 US photographers Ron Haviv and Christopher Morris presented some of the most important of their images from the break-up of Yugoslavia in Zagreb on Tuesday evening, with Haviv saying that he went to the Balkan war zone in the 1990s to "witness history" for himself.

"If you understand why you are there, what you are doing, it is an amazing responsibility to be there, to be the eyes of the world and to try to have an impact," Haviv said at the event at the Multiplexx cinema in the Croatian capital.

Haviv and Morris covered the conflicts across the former Yugoslavia throughout the 1990s, from the brief war in Slovenia to the fighting in Croatia, Bosnia and Kosovo.

They showed a large number of photographs - from disturbing images of corpses, photographs of soldiers in the field and celebrating victory, to emotional images of ordinary people and their suffering.

Haviv's images, like one taken in 1992 in Bosnia of a Serb paramilitary fighter kicking the lifeless body of a middle-aged woman who his comrades had killed just moments earlier, are some of the most iconic of the Yugoslav conflicts.

Ron Haviv and Christopher Morris in Zagreb with Haviv's image of a Serb paramilitary in Bosnia in the background. Photo: BIRN.

Haviv stressed that a photographer's work should "have some meaning".

"If [you are doing it] just for yourself, it's voyeurism," he argued.

His work in the Balkans was used as in cases against war crimes suspects at the International Criminal Tribunal for the Former Yugoslavia in The Hague.

He said that after the wars ended, he had the opportunity to talk with some of the people he photographed during the conflict.

He said he talked to Croatian man who both he and Morris photographed as a boy...