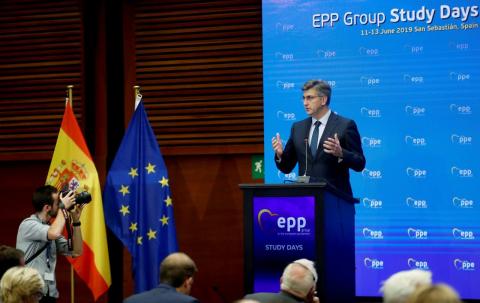 Croatia's ruling party will host Europe's largest political bloc, the centre-right European People's Party, EPP, on Wednesday and Thursday in Zagreb, a major publicity event for Prime Minister Andrej Plenkovic but one that has already caused some controversy.

The EPP Statutory Congress will bring together some 2,000 delegates and officials from more than 40 countries, including German Chancellor Angela Merkel, European Commission President-elect Ursula von der Leyen and her predecessor, Jean-Claude Juncker.

The bloc is expected to endorse outgoing European Council President Donald Tusk as its new leader, handing him the reins at a moment of uncertainty over EU enlargement in the Balkans and dispute over the state of democracy in Hungary, with Prime Minister Viktor Orban's nationalist Fidesz party a member of the EPP.

The bloc suspended Fidesz in March over its adherence to EU principles on the rule of law and ordered an internal inquiry.

"It is my firm belief that with a clear European platform, future-oriented policies that put citizens at the centre of our action, EPP can reinforce voters' confidence and ensure benefits for our countries and the European Union as a whole," Plenkovic wrote in the invitation to the event.

Plenkovic's ruling Croatian Democratic Union, HDZ, is a member of the EPP.

HDZ had hoped to hold some of the congress meetings in the building of the Croatian parliament, but dropped the idea amid objections from opposition political parties given the congress is a political party event, not a state occasion. The bulk of events will take place in the Zagreb Arena, a sports hall.

That was not the only moment of controversy.