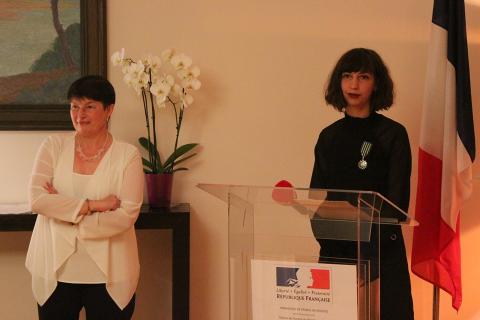 Kosovo film-maker Blerta Zeqiri, known for her work inspired by issues like missing persons and LGBT rights, was honoured with France's top cultural award, the Knight of the Order of Arts and Letters.

The French ambassador to Kosovo, Marie-Christine Butel, gave Blerta Zeqiri the Knight of the Order of Arts and Letters award at a ceremony in the French embassy in Pristina on Tuesday.

"Mrs. Zeqiri, because of your exemplary career and your continued efforts for independent, creative and committed cinema, you deserve to be honoured with the Knight of the Order of Arts and Letters by the Republic of France," Butel said.

She said that Zeqiri's work embodies the universal values ​​of tolerance and freedom that France wants to promote.

Zeqiri was born in 1979 in Kosovo and moved to France as a refugee in 1999 during the Kosovo war.

The short film 'Kthimi' ('Return'), which established Zeqiri's status as one of Kosovo's best directors, tackled the issue of missing persons after the war through the story of a woman and her son who are reunited with their husband and father after he disappeared without trace.

The film shows the struggles of a gay men failing to accept what he is and being forced by societal prejudices to marry a woman.