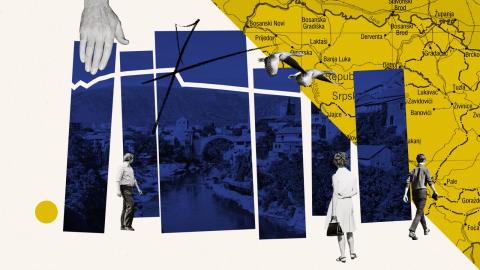 Like so many, he clung on believing that Bosnia would soon become a "normal" country offering decent prospects for the future — but now he has given up and is off to Germany again.

There he will join his brother and sister-in-law and their two children. They told him they would never leave Bosnia, "and then one day they just went".

Ilija's is the kind of angry rant you can hear every day in Bosnia. And almost a quarter of a century after the end of conflict, the constant reference to a lack of hope is an important clue to explain the parlous demographic situation the country is in.

According to the Balkan Public Barometer poll by the Regional Cooperation Council, 68 per cent are dissatisfied with the way Bosnia is heading.

In 1991, just before the Bosnian war, there were some four million people in the country. Now there are estimated to be only 3.3 million.

Bosnian women have an average of 1.26 children. That is not only well below the 2.1 needed for a country with no immigration to maintain a stable population, but it is also one of the lowest fertility rates in the world.

According to the United Nations, unless something changes, Bosnia's population could shrivel to 3.05 million by 2050, which would be some 29 per cent less than just before the war.

However, depending on the rate of emigration, this figure could be reached much sooner.