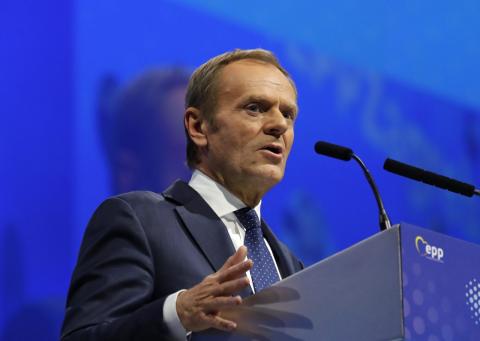 Newly elected as president of Europe's largest political bloc, the centre-right European People's Party, EPP, Donald Tusk said on Thursday that a group of 'wise men' looking at the currently suspended membership of Hungary's ruling Fidesz party would present its findings by the end of the year.

"Then I will start an intensive consultation [and] we will have a decision at the end of January," Tusk told the EPP's Statutory Congress in Zagreb.

Fidesz was excluded from the Zagreb event, having been suspended from the EPP in March due to criticism of its commitment to the rule of law and the EU's founding principles.

The former president of the European Council, Tusk was elected EPP president with 93 per cent of votes. His mandate will officially begin on December 1, when he will steer the bloc's policy on issues such as the state of democracy in Hungary and EU enlargement to the Balkans.

"We cannot give away the sphere of security and order to political populists, manipulators and autocrats, who make people believe that freedom cannot be reconciled with security, protecting our borders with liberal democracy, and an effective governance with the rule of law," Tusk tweeted after his election.

Hungary's nationalist government under Prime Minister Viktor Orban said it agreed with everything Tusk had said in Zagreb, "except for border control."

"And if Donald Tusk would like to meet Orban, we would not refrain," said Orban aide Gergely Gulyas.

Hungarian analysts expressed doubt that the EPP membership would find consensus on excluding Fidesz for good, and that the party's chances of being reinstated were good.

"Orban has a good personal relationship with Donald Tusk, despite the public criticism of the Polish politician,"...