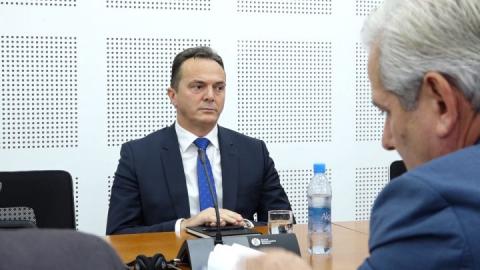 Shpend Maxhuni, the controversial former head of Kosovo's Intelligence Agency, KIA, is to return to police work, police told BIRN, less than a month after he resigned from the KIA with outgoing Prime Minister Ramush Haradinaj citing "personal and health reasons".

Maxhuni's career has been dogged by controversy; in 2018, he resigned as Kosovo's director of police in the wake of a Turkish intelligence-led operation to take six Turkish nationals from Kosovo to face trial in Ankara over alleged links to the man accused by Turkey of masterminding a coup attempt against President Recep Tayyip Erdogan.

The European Union condemned the operation, which was carried out in violation of normal extradition rules.

Kosovo's then interior minister and the KIA director also quit at the time, after Haradinaj said he had been kept in the dark about the operation. Maxhuni, however, was quickly appointed KIA director.

After his resignation from the KIA, Haradinaj awarded Maxhuni with the Skanderbeg medal for "professionalism and loyalty shown in the service to the nation."