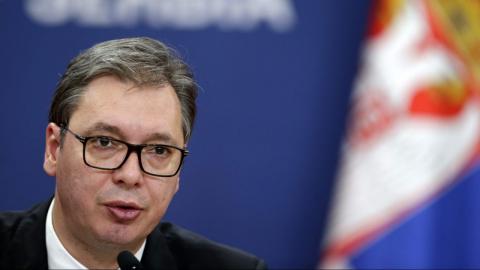 A Russian diplomat filmed apparently giving money to a Serbian official had a number of "conspiratorial meetings" with Serbian army officials at which cash changed hands, Serbian President Aleksandar Vucic said on Thursday, adding that he had asked Russia's envoy to Belgrade one question: "Why?"

Vucic said the Serbian man was a retired lieutenant colonel but identified him only by the initials Z.K. He said the meeting in the video, which surfaced on YouTube on Sunday, took place on December 24, 2018 in the Belgrade neighbourhood of Zemun.

"Serbia has photo, video and audio recordings of the contacts of [Russian diplomat Georgiy] Kleban with members of the Serbian Armed Forces," the conservative president told a press conference. Kleban is no longer in Belgrade.

The scandal has put Vucic in an awkward spot; a former ultranationalist, he has sought to deepen ties with fellow Orthodox Christian Russia, extolling its support for Serbia over the thorny issue of Kosovo, while simultaneously pursuing membership of the European Union.

He said that he hoped his Russian counterpart, Vladimir Putin, had not been aware of the apparent espionage operation. Earlier in the day, Putin's spokesman, Dmitry Peskov, said it was still unclear what had actually happened but that he was sure it would not harm relations between Moscow and its closest ally in the Balkans.

Vucic said that Serbian security services had determined Kleban had contacted "three conspiracy sources" on 10 occasions and that he handed over money to members of the Serbian army at three meetings.

He stressed again Serbia's gratitude to Russia for its support on the issue of Kosovo, which declared independence from Serbia in 2008 with the backing of the West but which is blocked...

President Putin Agrees to Hold a Referendum on Constitutional Changes