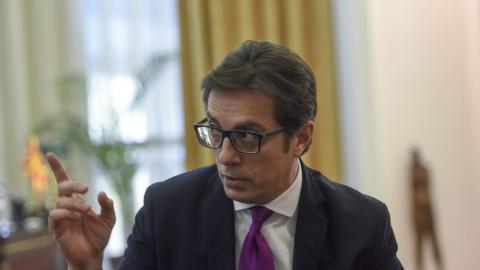 North Macedonian President Stevo Pendarovski cuts a very different figure from Gjorgje Ivanov, his predecessor. Ivanov was often jokingly referred to as a 'ficus', or house plant, due to his passivity. The same cannot be said of Pendarovski.

Although his formal powers are limited, he certainly keeps himself busy, and visible on the political and international scene. In his interview for BIRN, Pendarovski discusses North Macedonia's - and the Western Balkans' - enlargement prospects, particularly in light of his recent meeting with French President Emmanuel Macron. All is not lost, argues Pendarovski, shedding new light on French thinking on enlargement, as well as a host of other regional issues.

I Spy With My Little Eye…

There's nothing like a good spy story to instantly grab attention, locally and internationally. This week, a released video, filmed a year ago, of a Russian diplomat meeting a retired Serbian army officer and handing him a bag with cash in it, has set off an avalanche of speculation.

What were they up to? And how will the video's release and the revelations impact relations between Belgrade and Moscow, ahead of a meeting between Russian President Vladimir Putin and Serbian President Aleksandar Vucic in early December. Our analysis seeks to provide answers to these questions.

Stefanovic: Vucic to meet Djukanovic soon, the attack might be ethnically motivated

"There can be neither Great Serbia nor Great Albania, it can only be great tragedy"