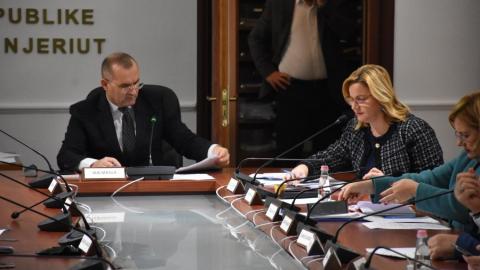 The statement was issued after the parliamentary law committee started its discussion on Friday of the two controversial media laws.

The laws are being touted by Rama as necessary to "regulate the online media", but rights groups describe them as an attack on freedom of speech.

The first draft law gives the Media Supervisory Authority's Complaints Council the power to oblige electronic publications and service providers to publish apologies, remove content or insert pop-up notices if they are found to have violated provisions on dignity and privacy.

The council has the power to fine media up to two million leks (about 16,500 euros) for such violations.

The second draft law subjects online media to the Telecommunication and Postal Authority, AKEP, which will have the power to insert pop-ups on websites if they have been found to have broken the law by the Complaints Council.

Failure to comply would result in fines up to 830,000 euros.

"The need to regulate online media or online services is one that is not only observed in Albania but is [part of a larger] trend that is also observed in the European Union, Canada, the United States or Australia," Deputy Minister of Justice Fjoralba Caka told Friday's law committee hearing, without providing evidence to support his assertion.

Klotilda Bushka, an MP from the governing Socialist Party, claimed to have consulted international experts on...