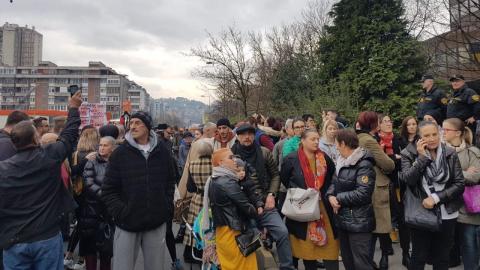 Hundreds of people took to the streets of Sarajevo on Friday, demanding that that children be better protected at the care home for children with special needs in the village of Pazaric near the Bosnian capital, and calling for the alleged abusers to be prosecuted.

The protesters rallied despite a decision by the government of Bosnia's Federation entity to remove the entire management of the care home.

"Replacement of the management is not enough. Those responsible should be prosecuted - all previous directors and boards of directors," said a mother of a disabled child at the protest.

The Federation government decided on Friday to dismiss the director, the management and supervisory board of the Institute for the Care of Mentally Disabled Children and Youth in Pazaric.

The decision came after a protest the previous day in front of the government building in Sarajevo, triggered by photos showing children at the care home tied to beds and other pieces of furniture, which were revealed by Federation lawmaker Sabina Cudic.

Redzep Salic, the dismissed director of the care home, told Bosnian media, that the government's decision was justified.

"In this situation, we all need to find the best way to help the Pazaric institute. I started the reform at Pazaric and I discovered a huge crime. I wish the children all the best. I will never forget this institution while I am alive," said Salic, who was as director in mid-April 2019.

He stressed that during his tenure, children were not tied up.

The protesters on Friday sent a list of requests to the Federation government, including a demand that one of the children's parents be appointed to the new supervisory board of the care home.

Their demands also include urgent funds...