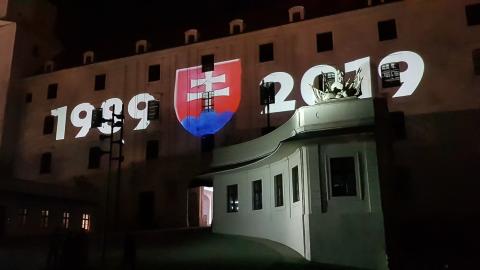 The commemorations bring mixed emotions. For some, they are a celebration of freedom and democracy. Others feel nostalgia for more certain times. And as the nation looks back, parties are looking forward to a general election early next year.

Slovakia and the Czech Republic both celebrated the 30th anniversary of the start of the Velvet Revolution on Sunday.

While the Slovak crowds in squares in the capital, Bratislava, and the eastern city of Kosice were no match for the mass protests by Czechs in Prague at the weekend, many turned out for events and debates honouring freedom, democracy, solidarity and justice.

In Bratislava, officials and prominent faces from November '89 discussed the crimes of communism at the Iron Curtain memorial under the capital's medieval Devin castle.

On the bank of the Danube, President Zuzana Caputova paid her respects to the victims of the totalitarian regime. She also visited the new Velvet Revolution Square in Bratislava and thanked the leaders of the revolution during a special event hosted in the Slovak National Theatre.

"The principle that the state is here for us and not the other way around returned to Slovakia 30 years ago," Caputova said. "Its practical application is surely far from perfection, but nobody can say with a straight face that we haven't seen significant, positive changes here in the past 30 years."

Three decades after the Velvet Revolution ended totalitarian rule, Slovakia is once again facing a crisis of trust in democratic institutions and frustration with corruption.

Three decades after the Velvet Revolution ended totalitarian rule, Slovakia is once again facing a crisis of trust in democratic institutions.

European Commission to Invest €101.2 Million to Promote a Green and Climate-Neutral Europe
Minister Lajcak: Slovakia continues to be strong supporter of Romania's accession to Schengen Area