Bosnia Struggling to Prosecute Migrants when Identity in Doubt 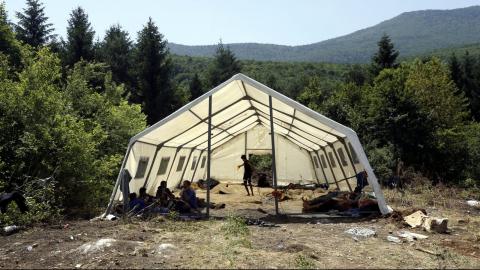 Experts who spoke to BIRN BiH say the rules must urgently be harmonised and the law updated to reflect the new challenges.

"This could be disastrous because many of them [migrants] do lack personal identification documents," said Vehid Sehic, a former judge and lawyer in Bosnia.

"That would mean they can do whatever they want without being criminally prosecuted. I think that's absolutely unacceptable."

The vast majority of migrants and refugees entering Bosnia move swiftly to cross the next border into European Union member Croatia.

But their path is frequently blocked by Croatian border police accused by international rights organisations of unlawful and often violent 'pushbacks' to keep them out, creating a growing bottleneck in northwestern Bosnia.

Many migrants, particularly if they are of a nationality unlikely to receive refugee status in Western Europe, discard their identity papers; some claim to be minors, while others give false names when stopped by police.

European experience indicates that crime rates among migrants are no higher than those among domestic populations. In Bosnia, 262 felonies have been registered as committed by migrants so far in the northwestern Una-Sana Canton, where most end up as they try to enter Croatia.

Police arrested Mehali and Ferroukhi and charged with murder during an altercation in the northwestern town of Velika Kladusa in June 2018, relying on witness statements and DNA analysis.

But Mehali's identity could not be confirmed to the satisfaction of the court, and he was acquitted....