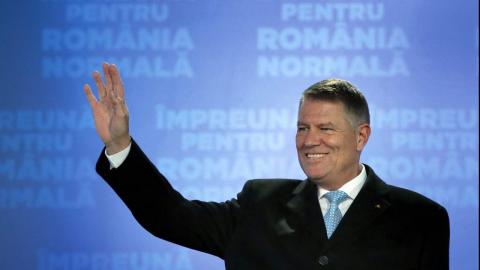 Incumbent President Klaus Iohannis of the National Liberal Party scored 66 per cent of the vote to secure a second term on Sunday, according to the official count with over 99 per cent of polling stations having declared results.

Iohannis defeated former Prime Minister Viorica Dancila, who got 34 per cent of the vote, the poorest score from her once all-powerful Social Democratic Party, PSD in a presidential election run-off since the advent of democracy in Romania in 1990.

Speaking to National Liberal Party members after the polls closed, Iohannis said: "It's the most categorical win ever obtained against the PSD."

Dancila announced that she won't resign as PSD leader, and pointed out that her party has recovered votes that it lost in May's European Parliament election, when the party fell to 22.5 per cent of the vote, its poorest result in a nationwide election in 30 years.

Dancila was the country's prime minister until October 10, when her government was toppled in a no-confidence vote. A minority National Liberal Party government allied to Iohannis was subsequently installed and could govern until the end of this legislative term in December 2020.

The presidential election came after almost two years of constant feuds between president Iohannis and then Prime Minister Dancila.

But despite his win, Iohannis' mission to implement his agenda of reforms will not be easy. Despite the symbolic importance of the presidency, the head of state's role is mostly ceremonial and it is the government that wields the bulk of the executive powers.

Iohannis has now an aligned government to work with, but Prime Minister Ludovic Orban's administration does not have a majority in a volatile and fragmented parliament still dominated by the...