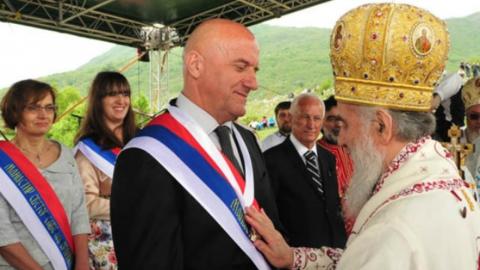 Joanikije, bishop of the city of Niksic in Montenegro, is an outspoken critic of Montenegrin leader Milo Djukanovic and of his plans to support the Montenegrin Orthodox Church, a feared rival to the dominant Serbian Orthodox Chuch.

Davidovic was born in 1957 in the town of Niksic. His business career began in 1992 when, as a former economist at the company Zeljezara [Ironworks] in Niksic, he founded a family-owned firm, Neksan.

In the 1990s, he was a close friend and business partner to the then Yugoslav prime minister and Montenegrin president Momir Bulatovic.

During the wars of the 1990s in the former Yugoslavia he was also chief of the police in Niksic. During the 1992-5 war in Bosnia, he was also briefly the Police Minister in the so-called Serbian Autonomous Area Herzegovina, headed by Bozidar Vucurovic.

Although considered a respectable businessman, he was arrested in 1997 for smuggling cigarettes and accused of damaging the state budget by 10.5 million German marks. Bulatovic rescued the businessman from trial, pardoning him just before his term ended as state president. After finishing his political career, Bulatovic worked for Neksan. He remained close to Davidovic until his death in June 2019.

The controversial businessman meanwhile returned to the public scene in 2003 when he took over the ironworks firm in Niksic, jumping in to save it after the Russian owner, Rusmontestil, left it with big debts and close to bankruptcy. That move was considered a favour to the government led by Djukanovic, averting a possible strike and social unrest in what weas once one of the biggest factories in former Yugoslavia.