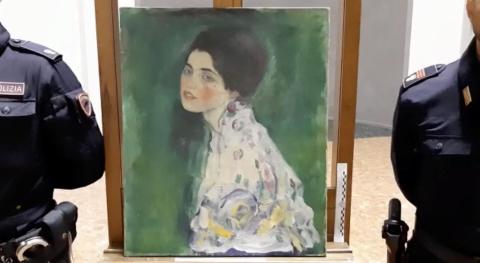 A painting by the Austrian artist Gustav Klimt that was stolen in 1997 might have been discovered, hidden in a wall of the Italian gallery where it was taken from, officials said on Dec. 11.

Workers discovered the painting, a portrait of a young woman completed in 1917, when they cleared ivy off the outside wall of the Ricci Oddi gallery in the northern city of Piacenza, and came across a small trap door.

Inside was a plastic rubbish bag that contained the artwork.

Police took charge of the find and experts will now examine it to check its authenticity.

The painting vanished in February 1997. Police said at the time they believed thieves had used a fishing line to hook the masterpiece off the wall and haul it up through an open skylight to the gallery roof where the frame was discarded.

A skilled forgery of the painting, wrapped up and posted to a disgraced politician, was seized by authorities a month later, adding to the mystery.

Papamarengh said it was hard to believe that the original had been hidden in the gallery wall ever since its disappearance, saying the building had been carefully searched after the theft.

"The painting's condition is excellent. It seems strange to believe it has been tucked away in a wall, close to the ground and vegetation for 22 years," he added.

Papamarengh said the Klimt was second on the list of most valuable art missing in Italy, just behind a painting by Caravaggio stolen from a church in Sicily in 1969.

The Klimt is considered particularly important because shortly before its disappearance an art student realised it was painted over another work...