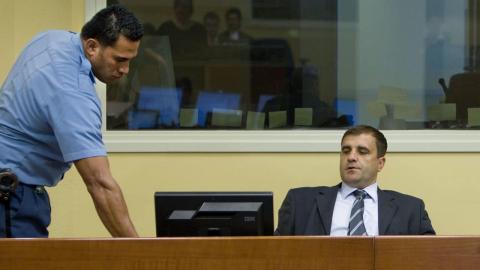 The Bosnian state prosecution on Friday charged Milan Lukic, the wartime leader of the Avengers paramilitary group, with crimes against 20 passengers who were abducted from a train at Strpci station near Visegrad in eastern Bosnia in February 1993 and then murdered.

The prosecution said in a statement that "18 Bosniaks, citizens of Serbia and Montenegro from the Sandzak area", plus one Croat from Belgrade and one "unknown person of Arab descent", were seized from the train which was halted at the station by Bosnian Serb soldiers as it was travelling from Belgrade to Bar in Montenegro.

Lukic, along with several Bosnian Serb soldiers, then "participated in taking the abducted people to a school in Prelovo, where they were beaten, tortured, abused and robbed", the statement said.

They were then taken to the village of Musici, where Lukic "personally participated in the murder of the abducted people, whose bodies were dumped in the Drina River", it added.

The remains of four of the victims have been found, but the others are still missing.

Lukic was sentenced to life imprisonment by the Hague Tribunal in 2012 for participating in the murders and expulsions of Bosniak civilians in Visegrad in 1992 and 1993, but not for the Strpci deaths.

He was convicted of involvement in two of the war's most notorious massacres, in which a total of 120 women, children and elderly people in Pionirska Street in Visegrad and the town's Bikavac neighbourhood were burned alive in June 1992.

He is currently serving his sentence in Estonia.

Ten former Bosnian Serb soldiers are currently on trial at the Bosnian state court in Sarajevo for the Strpci abductions and massacre.

Another ex-soldier, Mico Jovicic, was sentenced to five years in...