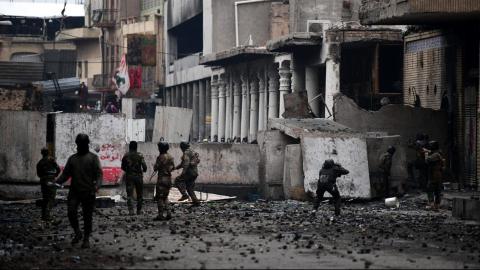 The 40 mm M99 grenades - far heavier than the tear gas canisters used by police forces around the world to control civil unrest - arrived in four shipments in 2009, BIRN reveals.

A decade later, they were used by Iraqi government forces to disperse anti-government protesters in the Iraqi capital, to deadly effect.

Military-grade grenades manufactured in Serbia and Iran were responsible for at least 20 of the more than 400 deaths reported since protests erupted in early October, piercing the skulls of those they struck, according to Amnesty International.

Iraqi authorities have insisted they did not import the deadly grenades, blaming instead a "third party" trying to undermine the government and stoke instability.

A BIRN investigation, however, has found that the Serbian grenades were indeed part of the 2008 Iraq-Serbia arms deal, with the Iraqi Defence Ministry the specified end-user.

Via eyewitness accounts and analysis of photographs and serial numbers, BIRN has traced the weapons to the central Serbian ammunitions producer Sloboda Cacak and the path they took to Iraq via the Serbian state-owned arms intermediary Yugoimport-SDPR, the company that built the Baghdad headquarters of Hussein's ruling Ba'ath party and at least five underground bunkers in the 1990s in defiance of United Nations sanctions.

Brian Castner, Amnesty International's Senior Crisis Adviser on Arms and Military Operations, said the grenades had caused "horrific injuries" of the like Amnesty had not seen before in its monitoring of protests around the world. And Serbia bears part of the blame.

"They can't just sell the weapon and wash their hands of it and say that now it is not their responsibility at all what happens," Castner told BIRN.