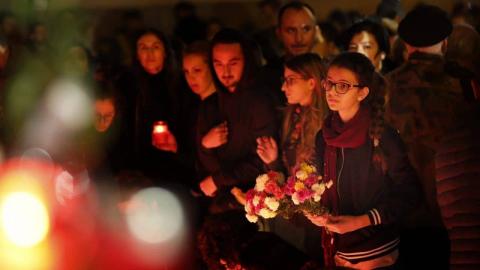 The three owners of the Colectiv club each received prison sentences of 11 years and eight months, while judges also sentenced Cristian Popescu Piedone, then mayor of Bucharest's Sector 4 municipality, under which administration of the club falls, to eight-and-a-half years in prison.

The two officials who approved the legal permits for the club to function despite the security deficiencies that could be seen during the tragedy were each given prison terms of nine years and two months.

The owner of the company in charge of the fireworks show held inside the club that night was also among those convicted, receiving a sentence of 12 years and eight months in prison.

Two pyrotechnics experts who worked on the show got nine years and eight months and ten years behind bars for their involvement in the tragedy.

The blaze shocked Romania and sparked a wave of indignation over the generalised corruption and incompetent practices that made it possible for the club to operate despite its non-existent security standards.

The convictions can be challenged in a higher court.

The Bucharest court also ordered authorities found guilty of negligence to pay out 50 million euros to the survivors of the blaze and the families of those who died.

The 2015 disaster also made evident serious shortcomings in the state emergency services, and the lack of medical facilities to treat those badly burned in the fire, some of whom had to be airlifted to hospitals in other countries...

Ex-Chief of Pentagon: US Should Deploy More Troops in Bulgaria and Romania
Romania's COVID-19 daily case count rises by 4,076; tests performed in last 24 hours: over 37,000