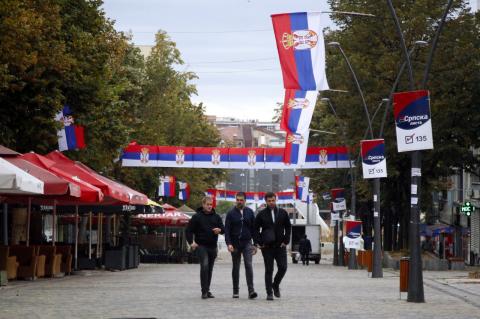 As talks in Kosovo drag on between Albin Kurti's Vetevendosje movement and Isa Mustafa's Democratic League of Kosovo, LDK, on forming a new coalition government, officials from Belgrade-backed Srpska Lista, the main Serbian party in Kosovo, have already taken up their new posts in Serb-dominated northern Kosovo.

More than 20 Srpska Lista officials on Tuesday took up the roles assigned to them by the Serbian government after most of the appointments were approved at meetings on November 21. Belgrade exercises de facto control over the far north of Kosovo.

Among those 20 were Goran Rakic, mayor of North Mitrovica and head of Srpska Lista, Srdan Popovic, the mayor of Gracanica, Ivan Todosijevic, former minister of Local Government in Kosovo and now a newly elected member of the Kosovo parliament, and Vinka Radosavljevic, deputy head of Srpska Lista. Other officials were selected to head faculty councils, utilities and health services in northern Kosovo.

According to the Kosovo constitution, the Kosovo Serb minority has the right to have at least one ministerial post in the government. However, it does not state that the minister has to be from any particular party.

"Being a Serb is a nationality and not a party membership card," said Kurti. "I have emphasised that we will not violate the constitution, but that we will not make a coalition with the Srpska Lista; we respect the...