Foreigners in one out of nine jobs in Slovenia 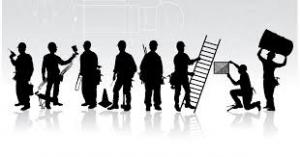 The overall number of people in a job in the country increased by half a percent from September and by 1.8% since October 2018, according to a report from the Statistics Office.

The largest number of new jobs was added in the construction industry, where the labour force expanded by 7.8% since October 2018.

Eleven percent of all people in employment in Slovenia were foreigners, most coming from Bosnia (about 49,600), Serbia (12,900) and Kosovo (9,600). Four percent of them were self-employed.