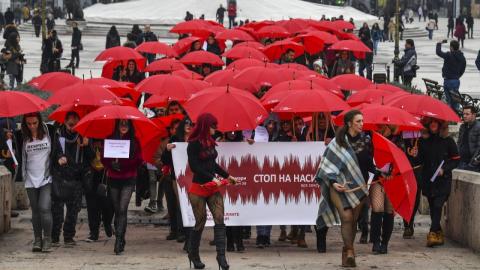 A March of Red Umbrellas gathered about hundred people who walked through Skopje's main pedestrian areas on Tuesday, calling for the decriminalisation of prostitution in North Macedonia and better social treatment of sex workers in general.

The event this year focused in particular on the fight against gender-based violence.

According to the presented research, gender-based violence against trans-gender sex workers is even more prevalent.

A sex worker stops traffic in Skopje during a rally to mark International Day to End Violence Against Sex Work​ers. Photo: EPA-EFE/GEORGI LICOVSKI

"Twenty-six attacks on trans women sexual workers, who face additional hatred based violence because of their identity, were documented [in 2018]. In 2019, the number of documented cases was smaller. But that was not due to positive changes. Our field experience shows that sex workers are discouraged, they just do not trust institutions and are afraid to report violence," Monika, a sex worker on the march told the media.

The march featuring people carrying red umbrellas, a global symbol of sex worker's rights, called attention to hate crimes committed against sex workers, as well as the need to remove the social stigma and discrimination they experience.

The participants called for the dismantling of laws that they say have made violence against sex workers acceptable in many countries. Sex workers began adopting the symbol of the red umbrella in the early...