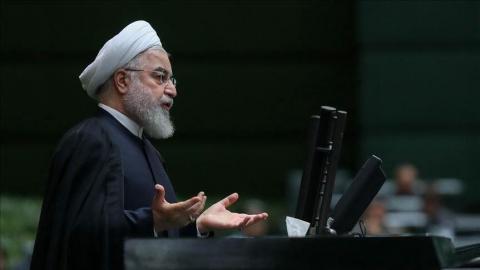 Iranian President Hassan Rouhani said on Dec. 17, American sanctions against the Islamic Republic will not last for long.

Speaking at a press conference before flying to Malaysia, Rouhani said world countries are seeking to establish friendly relations with Iran.

"The American pressure against Iran will not last long and all countries of the world want friendly and close relations with Iran especially with countries we have had relations with in the past," he said.

In Malaysia, Rouhani will attend a summit to be attended by leaders of Islamic countries.

Rouhani said the summit is a good opportunity for world leaders to address the regional and international issues.

"We believe that negotiation is the sole way to resolve the regional challenges," he stressed.

U.S.-Iranian relations have strained since the U.S. President Donald Trump's administration unilaterally withdrew from a 2015 nuclear deal between Tehran and world powers and re-imposed sanctions on the Islamic Republic.

'Seeking for Light' at Pilevneli Gallery

Fireball Meteorite Dazzles in the Sky in Japan