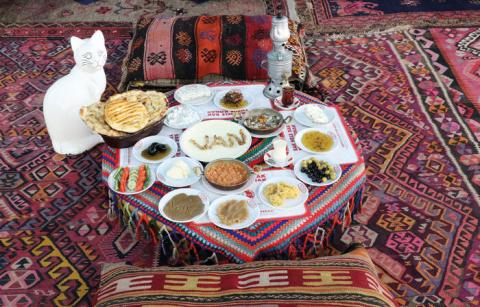 The designation would help promote the city's famous breakfast spread of herbed cheese, made with the plants grown in the plateaus; murtuğa, made with flour, butter and eggs; cacık, made with yogurt and cucumber; milk cream and karakovan honey.

In 2014, with the participation of 51,793 people, the record of "the most crowded breakfast table in the world" was broken in Van.

Speaking to the state-run Anadolu Agency, YYU Rector Professor Hamdullah Şevli said that the breakfast culture in Van dates back many years in the region.

"In our research, we learned that there were places called 'milk houses' in 1947 in the city, and these places were opened during the morning prayer. The tradesmen opened their offices in the morning and made their breakfast with hot milk, bread and buns in these places. The fact that Van is located on the Silk Road route also contributed to the development of this breakfast culture," Şevli said.

Şevli said that the most distinctive feature that distinguishes Van breakfast from other breakfast varieties is the endemic plant species growing on the highlands and mountain skirts of the city and herbal cheese made with milk obtained from the animals that graze on these plateaus.

Breakfast products such as roasted meat, karakovan honey and butter, cream and cacık are made with natural methods, and the breakfast culture continues in the same way as in the past, he said.

"People, who go to work early in the morning, take some bread, çörek, butter, cacık and cheese,...