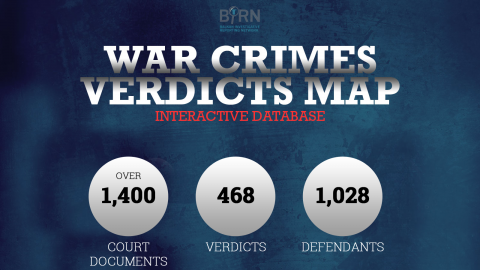 The Balkan Investigative Reporting Network on Wednesday published its updated and improved War Crimes Verdicts Map, enabling users to search rulings in cases from courts across the former Yugoslavia and from the UN tribunal in The Hague.

The map includes all the final war crimes verdicts that are available from 42 different domestic courts in Bosnia and Herzegovina, Croatia, Montenegro, Kosovo and Serbia.

It also includes the verdicts handed down by the International Criminal Tribunal for the Former Yugoslavia, and cases in which defendants died during their trials at the UN tribunal.

In the updated version of the map, users can now search by defendants' names, the units to which they belonged, the countries in which the courts are located, the crime locations and the dates. It is based on over 1,400 court documents.

The number of verdicts included is now 468, with a total of 1,028 defendants. The verdicts were handed down between 1992, when the first cases in Croatia were opened, and 2019.

Courts in Bosnia and Herzegovina delivered the most verdicts - a total of 209 - while Croatia had the biggest number of defendants, 396 in total.

"This map is the result of our dedicated work in following both international and domestic war crime trials since 2004. While reporting from the courtroom, we as journalists often struggled to get all the documents. Through the years, we accumulated a significant archive and we wanted to share this with our colleagues but also the general public to make their work in following war crime trials easier and more factually-based," said Marija Ristic, BIRN's regional director.

"This war crimes verdicts map comes amid growing efforts of courts to anonymise court documents, preventing us from...