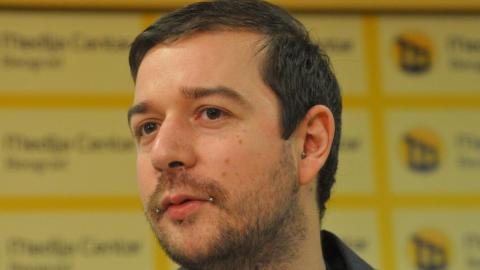 Stevan Dojcinovic, the editor at Serbia's Crime and Corruption Reporting Network, KRIK, was held at the airport in Abu Dhabi on Wednesday morning after being prevented from entering the United Arab Emirates, where he had been scheduled to speak at a major UN anti-corruption event.

The Committee to Protect Journalists, CPJ, said early on Wednesday that Dojcinovic told it via a messaging app that Emirati police told him he was blacklisted, and that he would be sent back to Serbia.

"Authorities at the airport denied that the Emirati government put him on the blacklist, but wouldn't identify which country did," the CPJ said on Twitter.

It added that authorities at the Abu Dhabi airport fingerprinted and photographed Dojcinovic and have since been holding his passport, but that he hasn't been detained.

Drew Sullivan, the editor of the Organized Crime and Corruption Reporting Project, OCCRP, initially raised the alarm about the situation by writing on Twitter that Dojcinovic was being denied entry to the United Arab Emirates.

"The UAE has a lot of explaining to do," Sullivan said.

KRIK is part of the OCCRP network and investigates corruption and crime in Serbia.

Dojcinovic is a prominent journalist who was awarded the Knight International Journalism Award in the US last month.

This is not the first time he has been barred from entering another country. In May 2015, he was not allowed to enter Russia and given a 5-year ban on returning.