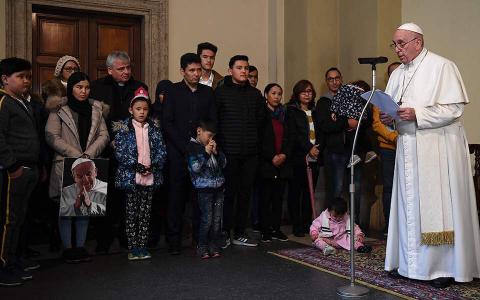 Pope Francis on Thursday received 33 refugees brought to the Vatican from the notorious Moria camp on Lesvos.
They will be hosted by the Vatican and the Sant'Egidio charity. Expressing concern about the plight of refugees, the head of the Catholic Church remarked that "the problem is not resolved by blocking boats," adding that such tactics left refugees and migrants at the mercy of human traffickers.
Francis, who at the peak of the migration crisis compared migrant facilities on Lesvos to "concentration camps," brought back 12 Syrian families after visiting the island in 2016.
Overcrowding at Moria and other camps on Aegean islands often lead to upheaval.
On Thursday, police on Samos fired tear gas to disperse a group of about 300 asylum seekers who were protesting conditions at the island's camp.

Civil servants to go back to staggered shifts, teleworking

Warning amid rise in Covid infections