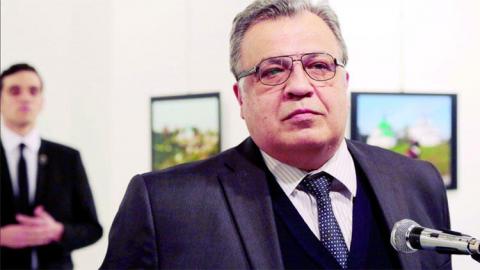 The assassination of Russia's ambassador to Turkey in 2016 sought to sabotage the normalization of ties between the two countries as well as a cooperation deal struck in 2001, an expert told Anadolu Agency.

On Dec. 19, 2016, Andrey Karlov was killed while speaking at the opening of an art exhibition in Ankara by Mevlüt Mert Altıntaş, an off-duty police officer linked to the FETÖ, the group behind the defeated coup attempt of 2016 in Turkey. The assailant was shot
dead in a standoff.

Mehmet Seyfettin Erol, head of the Ankara Centre for Crisis and Policy Research (ANKASAM), said the assassination of the Russian envoy first aimed to harm the healing of relations between Turkey and Russia, who were going through rough times after the former downed the latter's fighter jet on Nov. 24, 2015.

"The developments observed following the assassination of Russian Ambassador to Ankara Andrey Karlov on Dec. 19, 2016 show that it targeted the 'normalization process' dating to June 27, 2016 and the strategic cooperation implemented under the Eurasia Cooperation Action Plan of 2001," Erol said.

Erol said it was now clear that the FETÖ terror group and its puppeteers planned this "terrorist act" at a time when bilateral ties between Ankara and Moscow were moving in a positive direction and both countries had put normalization on their national agendas with a view to overcoming the dispute over the downed fighter jet.

He went on to say that the ongoing trial into Karlov's assassination and testimonies pointed to the FETÖ terror group and how it planned the killing six months prior to the incident in a bid to create hostility between Turkey and Russia.

However, the terror group and its puppeteers failed miserably according to Erol, as...

Turkey's automotive exports drop in Q1 due to COVID-19

Taliban warn peace deal with US near breaking point

Turkey's automotive exports drop in Q1 due to COVID-19