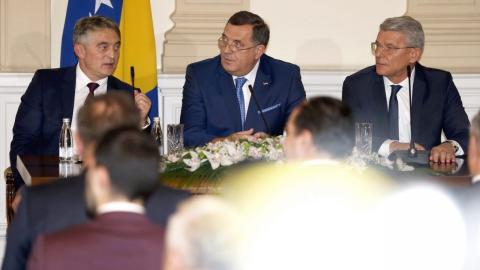 Bosnian media on Friday published the controversial document that Bosnia has sent to NATO headquarters instead of the Annual National Programme, ANP, which lays out the next steps toward NATO membership and activates the country's dormant Membership Action Plan, MAP.

Until they agreed on the document, Bosnian Serb leaders had opposed any further steps toward NATO membership, which long held up formation of a new state government.

On November 19, when the tripartite state presidency finally confirmed the election of Zoran Tegeltija as the new head of government, or Chairman of the Council of Ministers, they sent the Reform Program to NATO - one day after parliament confirmed the new government.

However, the document, which supposedly defines Bosnia's future relations with NATO, remained unavailable to the public until Friday.

In the meantime, core disagreements remain over NATO membership, which most Bosnian Serbs vehemently oppose. During the past weeks, leaders of the three main nationalist parties who signed the document have all interpreted it in different ways.

The now published document itself is not clear about the future relationship with NATO, and can be interpreted in different ways.

For example, it says that Bosnia "is committed to improving relations with NATO, without prejudice to a final decision on membership", which looks like a concession to the Bosnian Serb leader, Milorad Dodik, who still opposes NATO membership.

But the following sentence reads: "All activities are in accordance with previous decisions of the Presidency, the Council...