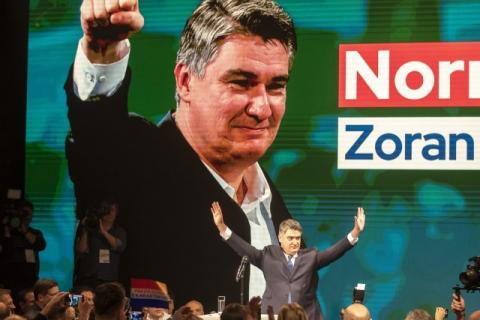 Miroslav Skoro won the most votes in Osijek.
Croatian media and analysts have estimated that whoever "wins" Zagreb will also be Croatia's new president, with Milanovic winning 33.33 percent of votes in Zagreb, followed by Miroslav Skoro with 23.37, and the third was Kolinda Grabar-Kitarovic with 20.14 percent of the vote.
Dario Jurican is fourth with 8.56% of votes, followed by Mislav Kolakusic (5.64%), Dalija Oreskovic (3.47), Ivan Pernar (1.67), Katarina Peovic (1.27), Dejan Kovac (1 , 09), Anto Djapic (0,19) and Nedjeljko Babic (0,17).
Milanovic also leads in Split with 30.53 percent of the vote, Kolinda Grabar-Kitarovic is second with 24.99 percent, and third Skoro with 22.20 percent, reports Hina. In Rijeka, Milanovic won 41.99 percent of the vote, Kolinda Grabar Kitarovic was second with 19.46 percent and Skoro third, scoring 12.92 percent.
Skoro leads in Osijek with 35.47 percent of the vote. The second is Grabar Kitarovic with 26.20 percent and the third Milanovic with 22.38 percent.

Kolinda won the most votes from Serbia and Bosnia-Herzegovina Tanjug, Darko Vojinovic, AP

On the other hand, Croats abroad with the right to vote in the first round of elections for the President of Croatia gave the most votes to Kolinda Grabar-Kitarovic. According to official data from the State Election Commission, she won 54.31 percent of the vote.
Miroslav Skoro is rated second, scoring 34.24 percent of votes, while Zoran Milanovic, who received the most votes in Croatia, won only 5.82 percent of votes abroad.
Observed by countries: Grabar-Kitarovic won 40.61 percent of Croatian votes in Serbia, Milanovic received 21.27 percent, and Skoro 20.44 percent. Index hr commented on the occasion that "Kolinda has won in Serbia". ...