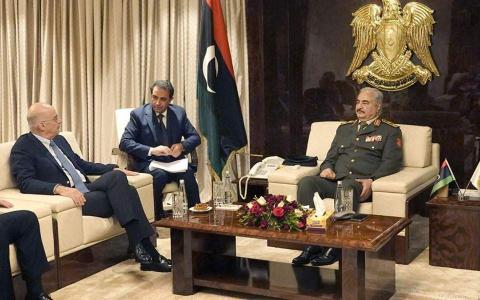 Libya's foreign minister criticised in a statement on Monday a meeting between Greek counterpart Nikos Dendias and Field Marshal Khalifa Haftar, leader of the Libyan National Army, in Benghazi, Libya, on Sunday morning.

Mohamed Taher Siala described it as a "gross violation of the decisions of the UN, the Security Council and regional organizations ... which all recognize the government of national unity as the only legitimate government" in Libya.

A Greek Foreign ministry announcement says that talks between Dendias and Haftar, who is fighting the Tripoli-based, UN-recognized Libyan Government of National Accord, headed by Fayez al-Sarraj, centered on the situation in Libya and prospects of ending the civil war there.

Dendias talked about the two "unfounded" memoranda signed between Turkey and the Tripoli government, on common maritime borders and Turkish...