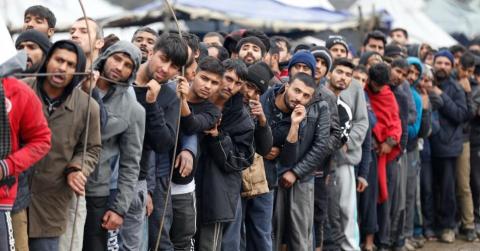 Bosnia's notorious Vucjak camp may have closed down after an international outcry, but the plight of migrants stranded in the country while trying to reach Western Europe is far from over.
The tent camp near the northwestern town of Bihac stood on a former landfill and near a minefield, becoming a symbol of migrant suffering as they travel through the Balkans.
The camp was flattened earlier this month, its residents transferred to other parts of Bosnia. Yet they are making their way back to Bihac because it is closest the place they want to get to: Bosnia's neighbor, European Union member Croatia.
In Bihac, migrants look for abandoned buildings or factories, or stay in the town's migrant center if they are lucky. They camp among bare walls, waiting for a warm meal from aid groups.
With the winter settling in, migrants want to hurry toward Croatia before the weather gets even worse. But this is not easy; they have to go over a mountain pass and police often turn them back.
They call it the ``Game," a cat-and-mouse chase with Croatia's border patrols over the mountain tracks. Sometimes migrants try several times before they manage to cross, sometimes it takes weeks, even months.
It's toughest for families with small children. Babies can't stop crying. Parents bring the children as close to the fire as possible to keep them warm, but they are tired and the cold nonetheless bites at their tiny faces.
A family from Syria and a couple from India paused briefly this month before moving on in sub-freezing temperatures, loaded with personal belongings and carrying children. The women, Fatima, 24, from Syria, and Nishademi, 22, from India, are tired and scared.
Elsewhere near the border, at an abandoned house, a group of young men are...