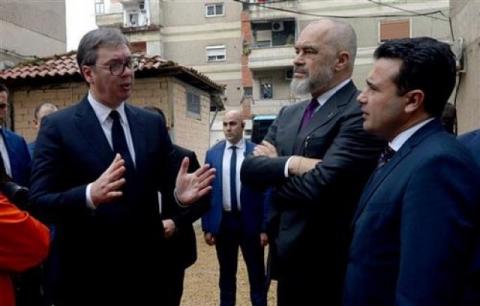 According to the Pristina newspaper, the main argument is that they believe that the initiative would isolate Kosovo and, if implemented, create conflicts in the Balkans.
Professor at the University of Pristina, Milazim Krasniqi, told the Zeri newspaper that the "mini-Schengen" initiative strengthens Serbia and weakens Kosovo's positions, claiming that statements by Albanian Prime Minister Edi Rama represent a betrayal of Kosovo.
"The actions of the Albanian Prime Minister present a betrayal of Kosovo, because an alliance between Kosovo and Albania is needed. There can be no regional initiatives without solving the problem of Kosovo's relations with Serbia and Bosnia-Herzegovina", Krasniqi said.
Krasniqi said such initiatives are failing because their goal is not to integrate the entire Balkans, but to empower Serbia, and if it continues, conflicts may arise.
"This could jeopardize the balance in the Balkans and could create a tendency for conflict. The best solution is that entire region focuses on the European integration process. For Serbia and Kosovo in order to reach a comprehensive agreement, and to accept the reality that exists, Kosovo needs to be recognized as independent. Once recognition would happen, then regional initiatives would make sense and serve to accelerate the process of European integration", he said.
Representative of the NGO Chohu, Arton Demashaj, told Zeri newspaper that Kosovo would not be harmed if it did not attend the mini-Schengen meetings. He also said that such an initiative may not be realized without the involvement of the entire Balkans.
The third "mini-Schengen" meeting between Albania, Macedonia, Serbia and Montenegro was held in Tirana on December 21, while Kosovo and Bosnia and Herzegovina...