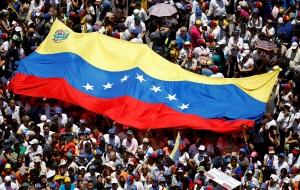 Slovenian Interior Ministry data shows there are 335 Slovenian citizens in Venezuela, whereas the total number of people of Slovenian descent is estimated at 1,000.

Slovenian citizenship is not a condition for repatriation, which entails a special status and rights for 15 months, but Slovenian origin is.

Based on the expressed willingness of Slovenians in Venezuela to return home, the government assessed only up to 70 persons would ask to be resettled in Slovenia.

Until mid-December, 17 repatriation applications were granted for 30 people, Dejan Valentinčič, deputy head of the task force in charge of repatriation at the Office for Slovenians Abroad, told the STA.

He said that another eight applications for 23 people, which had been initially incomplete, were still being processed.

Valentinčič also said that the first group was expected to...

US issues some exemptions to Venezuela sanctions, targets more officials