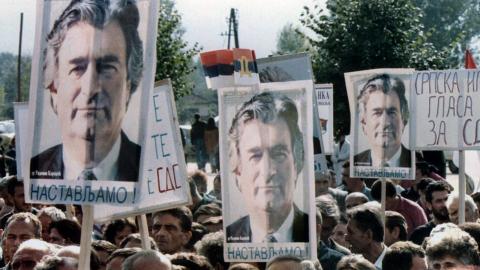 "He deserved nothing less than life imprisonment," said Nura Alispahic from Srebrenica, whose two sons were killed.

The verdict was also welcomed by Bosniak politicians - but political leaders in the country's Serb-dominated Republika Srpska entity said it proved that the UN court was anti-Serb.

He argued that because of it, post-war reconciliation has become "nearly impossible".

A Sarajevo resident catches up with the latest news during the siege of the city in 1993. Photo: EPA/ENRIC MARTI.

Bosnia and Herzegovina's continuing problem is that each of its three main ethnic groups - Bosniaks, Croats and Serbs - has its own version of the truth, which is obstructing the country's progress, said veteran legal expert Vehid Sehic.

"We are still not ready to face the truth, and there can only be one. Unfortunately, there are three truths in Bosnia and Herzegovina. Politicians regularly heat up the atmosphere by glorifying war criminals. The truth is bitter, but it is the best cure for reconciliation," Sehic said.

Aleksandra Letic of the Helsinki Committee for Human Rights in Republika Srpska argued that transitional justice has taken a few steps back in 2019.

"We are going backwards. The verdict against Karadzic, which was supposed to open up some dialogue, has not lead to social catharsis. That demonstrates how much we are disinterested in truth institutionally," Letic said.

In 2019, the government of Republika Srpska appointed members to two controversial commissions it has set up to re-examine wartime events from its own perspective - the...