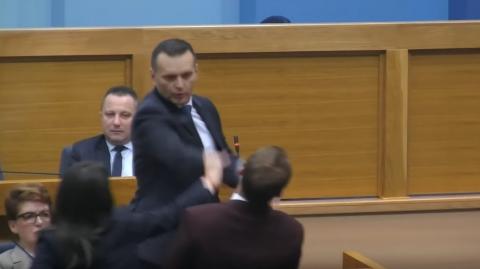 Opposition lawmakers in Bosnia's Republika Srpska called for the resignation of the entity's interior minister after he slapped an opposition MP on Monday during a debate on Bosnia's future relationship with NATO.

The incident occurred during heated exchanges on Monday evening over a sealed document - the 'Reform Program' - that Bosnian Serb leader Milorad Dodik agreed to with Bosnian Croat and Bosniak leaders during negotiations on the creation of a new state-level government.

Opposition lawmakers in the mainly Serb Republika Srpska have condemned the confidential document, drafted for NATO as the latest step deepening Bosnia's relationship with the Western military alliance, as opening the door to future membership of the bloc. Dodik and his Alliance of Independent Social Democrats reject this, saying they will never allow Bosnia's accession to NATO.

As Interior Minister Dragan Lukac addressed the debate, 26-year-old opposition MP Drasko Stanivukovic interrupted him. The two men began arguing and Lukac challenged Stanivukovic to approach him, which he did. Lukac tossed papers at him and then slapped him. Opposition MPs left the parliament in protest.

"He hit me," Stanivukovic told reporters. "The interior minister threatened me. The man who leads the police, that man issues threats. He told me that I would end up like NATO flags broken on the floor. I'm going to sue him."

Stanivukovic called for a protest on Thursday in Banja Luka, the administrative centre of the Republika Srpska, "until Lukac resigns."

Lukac said he had acted in self-defence, accusing Stanivukovic of throwing a NATO flag at the prime minister and approaching him in a threatening manner. "I don't know what he had in...