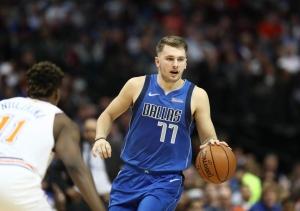 The year started sensationally for the Slovenian, as he came second only to LeBron James in the fan voting portion of the selection process for the NBA All Star Game, proving himself as one of the most popular players in the league.

However, Dončić did not make it into the NBA Western Conference's starting line-up for the exhibition game, falling short in the vote by the league's players and a media panel, as the fan vote accounts for only 50% of total vote.

The Slovenian nevertheless made an astonishing individual feat as the season was concluding, securing averages of at least 20 points, 7 rebounds and 5 assists per game to become only the second NBA rookie ever to reach the benchmarks, along with the great Oscar Robertson.

While his Dallas Mavericks did not make the play-offs in the previous season, Dončić won the NBA Rookie of the Year Award to become...