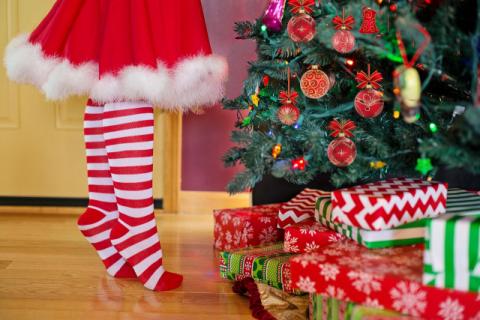 On December 25 we celebrate Christmas, also known as Nativity of Jesus, Bozhik or Bozhich. This is one of the greatest church holidays in the Christian world.

Today's name day celebrates everyone who bears the names -

The holiday begins in the first hours of December 25th.

It is a sequel to Christmas Eve. On it the Christians celebrate the birth of the Son of God Jesus Christ.

According to the Gospel, Christ is born in a cave in the town of Bethlehem, in the province of Judea. At the moment of the birth in the sky, an unusual light flashes, and the angel proclaims that the Savior has come to the world. Bethlehem shepherds are the first people to worship God-Son. There are three Eastern kings who have been brought to the place by the star above the sky. Following the customs of time, the kings give gold, frankincense and myrrh.

Nativity of Christ is one of the 20 church holidays in Bulgaria.

It is connected with family gifts, as well as gifts from Santa Claus and other mythical characters. On Christmas, Christians celebrate the birth of Jesus. According to most historians, the first celebration of the Nativity took place in Rome in 336 AD.

The name Christmas comes from the Roman calendar Kalendi,

dedicated to the winter solstice (from the word "calendar"). Until the 4th century in the Calendar of the Orthodox Church there is no celebration dedicated to the birth of Christ. The resurrection and his...