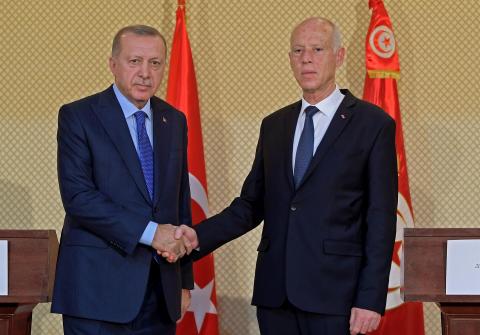 Turkey believes that Tunisia will contribute to efforts to promote stability in its eastern neighbor Libya, Turkey's president said on
Dec. 25.

Speaking at a joint press conference with his Tunisian counterpart Kais Saied during a surprise visit to Tunisia, President Recep Tayyip Erdoğan said the turmoil in Libya is affecting not just itself but also neighboring countries like Tunisia.

"I believe Tunisia will make valuable and constructive contributions to efforts to achieve stability in Libya," Erdoğan said.

He also said during his visit, he and Saied would discuss steps to start a political process after a cease-fire in Libya and how Tunisia might help.

On Nov. 27, Ankara and Tripoli's Government of National Accord (GNA) signed two separate agreements, one on military cooperation and the other on maritime boundaries of countries in the Eastern Mediterranean.

Since the ouster of late leader Gaddafi in 2011, two seats of power have emerged in Libya: one in eastern Libya supported mainly by Egypt and the United Arab Emirates, and the GNA in the capital Tripoli, which enjoys U.N. and international recognition.

Turkey plans to start vaccinations at nursing homes this week

External assets at $228.6 bln in November