Heroes of 2019: People Who Took Action for Positive Change 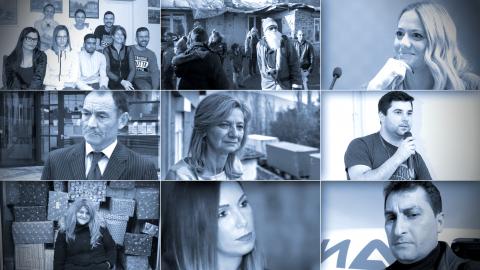 In 2019, the migrant crisis hit Bosnia and Herzegovina more severely than it did four years ago when the whole of Europe was dealing with a vast number of people moving towards Western Europe along the so-called Balkan route.

So far this year, according to Bosnia's Ministry of Security, some 50,000 migrants entered the country. Photos of hungry, cold migrants in the insanitary Vucjak camp in northwest Bosnia, not far from the border with Croatia, circled the world.

But many Bosnians, remembering their own experience of homelessness in the Bosnian war of the 1990s, did what they could to help - unlike the state and entity governments, which often acted as if the migrant crisis was occurring in another country.

A lesson in humanity was given to all the politicians by the four-member Husic family, from the northeastern Bosnian town of Tuzla, who took a 25-year-old migrant from Pakistan into their home.

In 2017, in search of a better life, Adil Amanet left his native Pakistan and headed for Greece. After many problems and thousands of kilometres of walking, he reached Bosnia two years later, in November 2019. His first three weeks he spent in inhumane conditions on the cold, concrete platform of the main bus station in Tuzla. Through a web of fortunate circumstances, the Husic family welcomed him into their home.

"God has commanded that we take care of one another, and I am grateful to God for being able to help Adil, or anyone else, with my family. I don't like people who just talk and leave no deeds behind," Adira Husic told the Bosnian news website Klix.

"Many may not be ready to do what I am, but they can help in other ways, by bringing food and clothing to the bus...