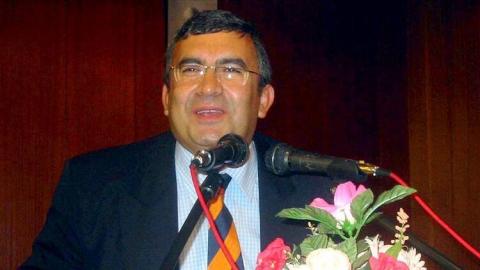 Justice Minister Abdulhamit Gül on Dec. 25 announced that Ankara has started to hold talks regarding the extradition of a key suspect from Ukraine, in connection with the murder of Turkish academic Necip Hablemitoğlu.

Speaking during the assessment meeting of "Human Rights Action Plan," Gül said that the Turkish government, especially President Recep Tayyip Erdoğan has been "meticulously" showing effort for the extradition of Nuri Gökhan Bozkır, the main suspect in the murder case.

"Our expectation is the suspect's extradition to Turkey, in accordance with international law. Of course, the next process will be carried out by the independent judiciary," Gül said.

"This person, or persons, and shedding light over the incident will be at the discretion and authority of the judiciary," he said.

The minister also conveyed that Turkish officials held necessary talks with their Ukrainian counterparts regarding "the extradition, the nation's expectations and the judiciary's requests."

"I hope the necessary thing will be done for his extradition before the independent judiciary," he added.

Sought by a Turkish warrant and Interpol Red Notice since May, Nuri Gökhan Bozkır was first arrested on July in Ukraine for possible extradition. Nevertheless, after an asylum request, Bozkır was not extradited to Turkey.

The next court hearing for his case is set for Jan. 10. It was later revealed that the suspect is a fugitive linked to the FETÖ, the group behind the defeated coup attempt of July 15, 2016.

Atatürk University's Necip Hablemitoğlu, known for his research and books on FETÖ, branding it a criminal...