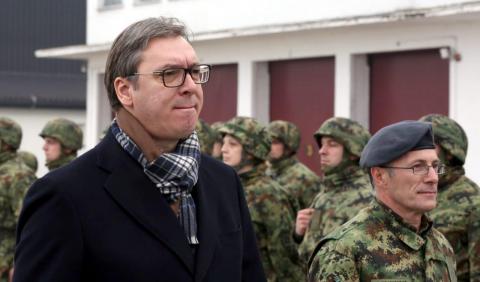 The last few months have seen the ruling SNS in Serbia buffeted by several corruption scandals and other affairs. Perhaps the most benign of these has been that the Finance Minister, Sinisa Mali, has been found to have plagiarised his doctoral thesis, yet remained in his post. Intellectual theft does not, it seem, make one unfit to guard the country's finances.

But have they damaged the ruling party? Remarkably, it seems that the SNS, and its leader Aleksandar Vucic, are like Teflon - nothing seems to stick, or do damage. The scandals may have stirred up the rather stale political atmosphere, but the ruling party has, for the time being, been able to walk away from them with only minor scratches. A firm grip over the media, prosecution and judiciary certainly helps in this regard.

With NATO membership within grasp for North Macedonia, many within the country are trying to take stock of the benefits of membership in the alliance. Aside from the important security benefits, enshrined in collective defence articles of the organization's founding treaties, member states such as North Macedonia could also benefit economically, in a very direct way.

While North Macedonia may not have a developed arms industry which can sell weapons to other alliance members, Macedonian companies will be able to take part in bidding for other kinds of procurement contracts - worth millions - for NATO provisioning. Some Macedonian companies are gleefully rubbing their hands - but will they be able to exploit these new opportunities? We analyse in...