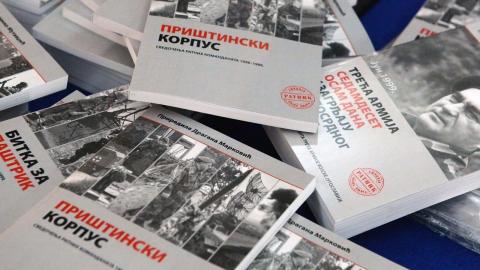 On May 9, retired Yugoslav Army general Vladimir Lazarevic, a convicted war criminal, headed a World War II Victory Day parade through the streets of the southern Serbian city of Nis. The showpiece event was organised by Russian war veterans with the backing of the Serbian authorities.

Lazarevic's prominent role in the parade highlighted how in 2019, Serbian officials continued their practice of celebrating war criminals as military heroes.

In October, Nebojsa Pavkovic, a former senior Yugoslav Army officer who was convicted alongside Lazarevic and is still serving his prison sentence, had his new book published by the Serbian Defence Ministry's Ratnik (Warrior) imprint. The ministry then promoted it at the Belgrade Book Fair.

"The memoirs of General Nebojsa Pavkovic, as well as other commanders and fighters published in the Ratnik edition, contribute in many ways to the truth about the fight during the NATO aggression [bombing of Yugoslavia]. We don't see any reason to be ashamed of our people's struggle and those who led that fight," the Defence Ministry said.

The Hague Tribunal ruled in January 2014 that Pavkovic and Lazarevic, along with former Yugoslav deputy prime minister Nikola Sainovic and former Serbian police general Sreten Lukic, were guilty of the murder, deportation and inhumane treatment of Kosovo Albanians during the war in 1999.

The Belgrade-based Humanitarian Law Centre NGO accused the Defence Ministry of "openly mocking the victims of crime" and denying facts established by the UN war crimes court in The Hague.

The Defence Ministry was involved again when another controversial book was launched in November at the Central Military Club in Belgrade.

This time it was a book denying that Bosnian Serb forces...