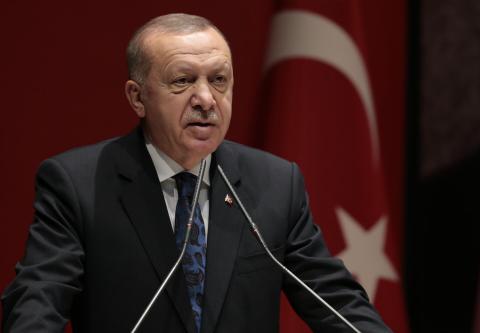 The Turkish government will submit a parliamentary motion for the deployment of troops to Libya after a demand by the U.N.-backed government in Tripoli, President Recep Tayyip Erdoğan has said, signaling that the necessary approval would be obtained from the Turkish Parliament before mid-January.

"Based on our memorandum of understanding on the security and military cooperation, we will submit a motion for the deployment of the troops to parliament as the first item after it re-opens. We will therefore be able to provide a more efficient support to the legitimate government in Libya after the approval from our parliament," Erdoğan said at his ruling Justice and Development Party (AKP) meeting on Dec. 26.

Turkey and Libya signed two important memoranda of understandings on Nov. 27, one on the defense and security cooperation and the other on the delimitation of the maritime jurisdiction zones in the Mediterranean Sea.

Turkey backs the Tripoli-based Government of National Accord (GNA) under the leadership of Prime Minister Mustafa Fayez al-Sarraj, who is defending his government against General Khalifa Haftar's forces, backed by Russia, Egypt, France, United Arab Emirates, Saudi Arabia and other countries. The survival of the GNA is vital for Ankara in order to be able to implement the maritime jurisdiction deal with Libya against Greece, Egypt and Greek Cyprus.

Erdoğan recalled Libya's importance for Turkey in both historical and social ties and underlined that its support will continue in the coming period. "We have stood against the attacks by a coup plotter general against the country's legitimate government from the very outset. We have given, are giving and will give all sorts of support to the Tripoli government in its fight...