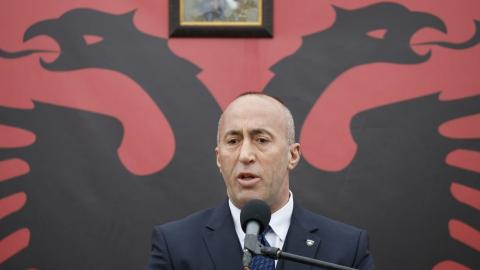 After his invitation for interview as a suspect, Haradinaj, a former KLA commander, resigned as premier in July.

He has already been tried twice by the International Criminal Tribunal for the Former Yugoslavia in The Hague and was acquitted both times, and he insisted that the Specialist Chambers would not undermine the KLA's legacy.

"The 1998-99 war was clean and sacred. I am pretty sure that the righteousness of the KLA's war will be again confirmed by this court," Haradinaj said.

The Kosovo Specialist Chambers, which operate as part of Kosovo's justice system but are staffed by internationals and based in the Netherlands, were established in 2015 under intense pressure from the EU and the US following an explosive report by Council of Europe rapporteur Dick Marty five years earlier.

In Marty's report, he accused the KLA of kidnapping, killing and unlawfully detaining ethnic Serbs and Roma as well as Albanians considered political opponents or collaborators with the Serbian state.

Marty also alleged the KLA harvested body organs from Serb and Albanian captives. With the exception of President Hashim Thaci, all the ex-guerrillas named in Marty's report have been summoned by the Hague prosecutors.

The KLA's former commanders, including Thaci, have repeatedly dismissed the accusations, calling them a pernicious attempt to tarnish Kosovo's fight for freedom from Serbian repression - a view that is widely held in the country.

"I am convinced that this court will prove the KLA's war was just and will stop the attacks on the truth of our people and the KLA," Kadri Veseli said.

The issuing of indictments will mark the culmination of more than four years of investigation by the Specialist Prosecutor's Office -...