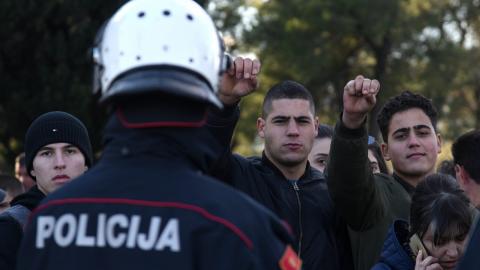 Protesters first gathered in front of the parliament in Podgorica on Thursday and were soon joined by Serbian Orthodox clergy.

They led a Church service, which started early on Thursday and lasted until late Thursday night in front of the parliament.

Meanwhile, people gathered in several other cities and towns in Montenegro to support the protests and block some main roads.

Some reports said police used force on protesters and arrested dozens of them while also using pepper spray.

The new law obliges religious communities to provide evidence of ownership in order to retain their property, a provision that the Serbian Church says is designed to allow the government to strip it of its holdings.

Despite the protests and incidents inside and outside parliament, the law was adopted on Friday morning.

Opposition MPs rushed at the Speaker of the Parliament, December 27, 2019. Photo: BIRN